Program opens with Schumann Sonata #1 in a, Op. 105, with Sar-Shalom Strong, Piano

In my most recent post, I wrote about seeking the balance between pulse and freedom – between expressing Bach’s internal structure and the freedom of flow, in doing so.

I decided for today’s performance to allow my impulse for flow to lead the way.  To be honest I am not certain how I feel about the results, there was a recording made and I will listen –  I was deep into flow most all of the way through.  I also made both repeats in the Corrente and Giga (this may sound really picky to some of you readers, but truly, it isn’t) and felt the results were “right”.  There is another performance tonight, so I will see later where it all ends up.

This 39th performance in the Journey of 100 was a house warming concert for Robert, Deborah and their friends.  Before starting, I described my intention through the series of performances to more deeply explore the rapport between a Divine musical work, the listeners and me the performer.  After hearing some of the audience’s response to the music I began to feel in awe of the potential Music has to open connections between us as people because it was clear that folks felt  moved, seemingly more connected with themselves and with the composer’s spirit.

It has been over a year since performance #38 and to be honest, I have not missed the piece.  Yet as I write this morning, I am totally enthused about getting back inside it for the performances coming up this week.

Last night I continued to explore the balance between creative freedom in the timing of the phrases and liberties with the rhythmic pulse (for example how far I might move away from a metronome’s steady beat), and sticking with pulse – the powerful framework in all of Johan Sebastian’s music.  Towards the beginning of playing I felt self conscious at times that I was manipulating the phrases rather than responding to the inner guidance of the music.

Another aspect that I must rethink is how to handle the repeats written in each of the two sections of the Allemande, Corrente, Sarabande and Gigs (the first four movements) – generally I take the first repeat and not the second.  I wonder if this is somehow undermining the long-form flow of the work because the Ciaconna (the last movement) is a simple flow of variations, with no repeats at all.

I am looking forward to re-connecting with this work that I performed last week with the painters in Tim and Lala’s art studio. Tonight is for a few friends, old and new.

Tonite was one of the performances for which I did not specially prepare, as I have been working hard all week for the Conference.  My focus was to just let go, and allow the piece to play itself, so to speak.   The hall  without people is very resonant, and I found myself just allowing the tones to have lots of time, so the rhythmic framework was quite free.  I am not sure this is good, nor am I sure it is bad.  I also noticed that a few little errors have crept in here and there and they need to be given some “discipline” to get them back in line.

My next step is to find a way to take my playing of the work from where it is now (pretty good) to a much higher level;  how to do that is not yet clear to me.

A live performance for a session at Art New England, “The Mark and Beyond…” taught by ANE faculty Timothy Hawkesworth and Lala Zeitlyn.

This performance for their painting students, is one in which we explore how the live performance of the Chaconne will facilitate the artists’ access to individual creative places in their own bodies.  (Teaching this access is part of the expertise that Tim and Lala bring to their students).  Performed in their teaching studio at Bennington College, VAPA (Visual and Performing Arts) center.

We anticipate that the results of the artists’ work (photos) will be posted here in the blog at the end of this week.  Please check back with us on Sunday August 7th!

This was a breathtaking experience for me.  The sound of the two studio rooms was something close to perfection, and had a profound influence on my pace of playing the music  – more freedom in time, more freedom in inflecting the music with intensity, with “emptiness”, and colors of sound.  We collected many shots of the artists’ work, and once we get a chance to process them I will share some here.

A live “test” performance for ANE faculty Timothy Hawkesworth and Lala Zeitlin and a few friends. We are considering a performance for their painting students this week, one in which we explore if the live performance of the Chaconne will facilitate the artists’ access to individual creative places in their own bodies.  (Teaching this access is part of the expertise that Tim and Lala bring to their students).  Tim and Lala want to experience the creative possibilities directly, for themselves, before bringing the opportunity to this week’s class.  Performed in their teaching studio at Bennington College, VAPA (Visual and Performing Arts) center.

My post-performance comments: Well, I am really glad we did this test run today –  playing in the studio along with the sounds of the artists working requires another level of concentration for me.   When the students are there later in the week, as well as the live models,  it will certainly require me  – and inspire me –  to take the music to another level.

We were joined by Larry and Eli, two of Lala’s cousins, artists all.  Images of the work they created during the performance are here, below.

Preparing the music last week, getting ready for this week’s performance, has been difficult.  A large part of me did not want to get emotionally involved with the mood of the music, incredible and inspiring as it is. However, I was able to craft a working method that focussed mostly on my body and the relationship to the violin and bow rather than the emotion of the music.  Seems to have paid off; I will know more about this after the next performance. 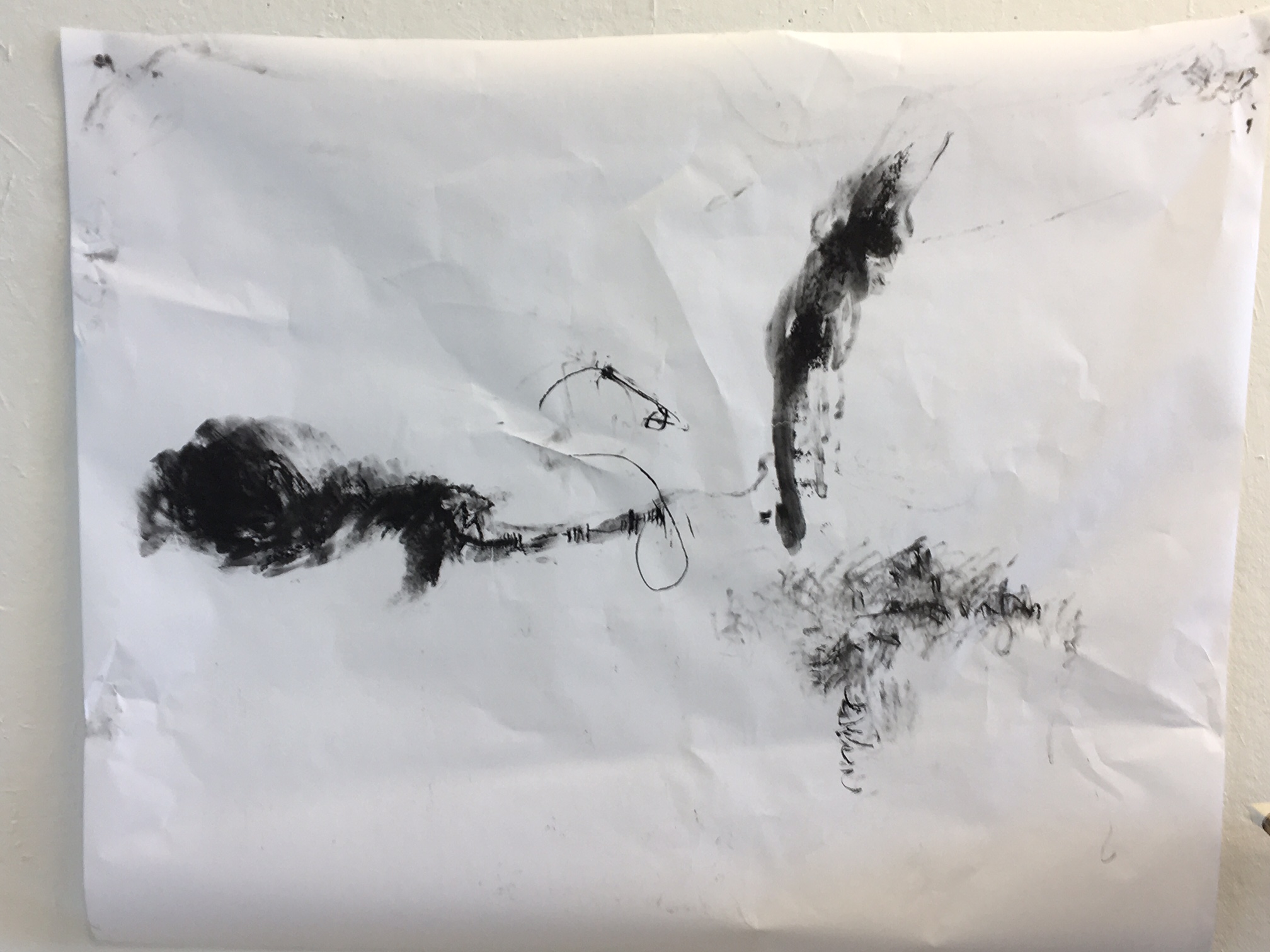 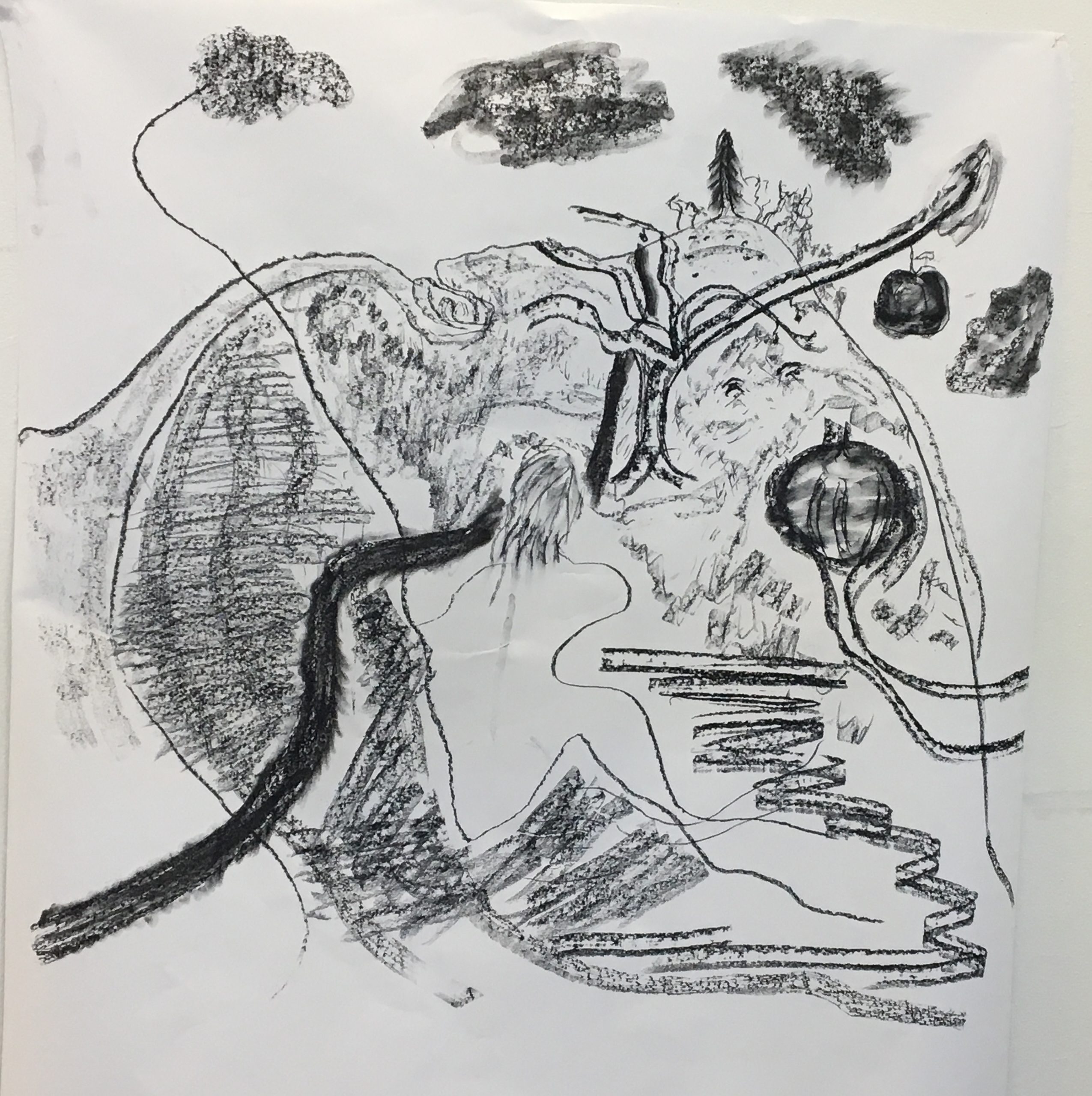 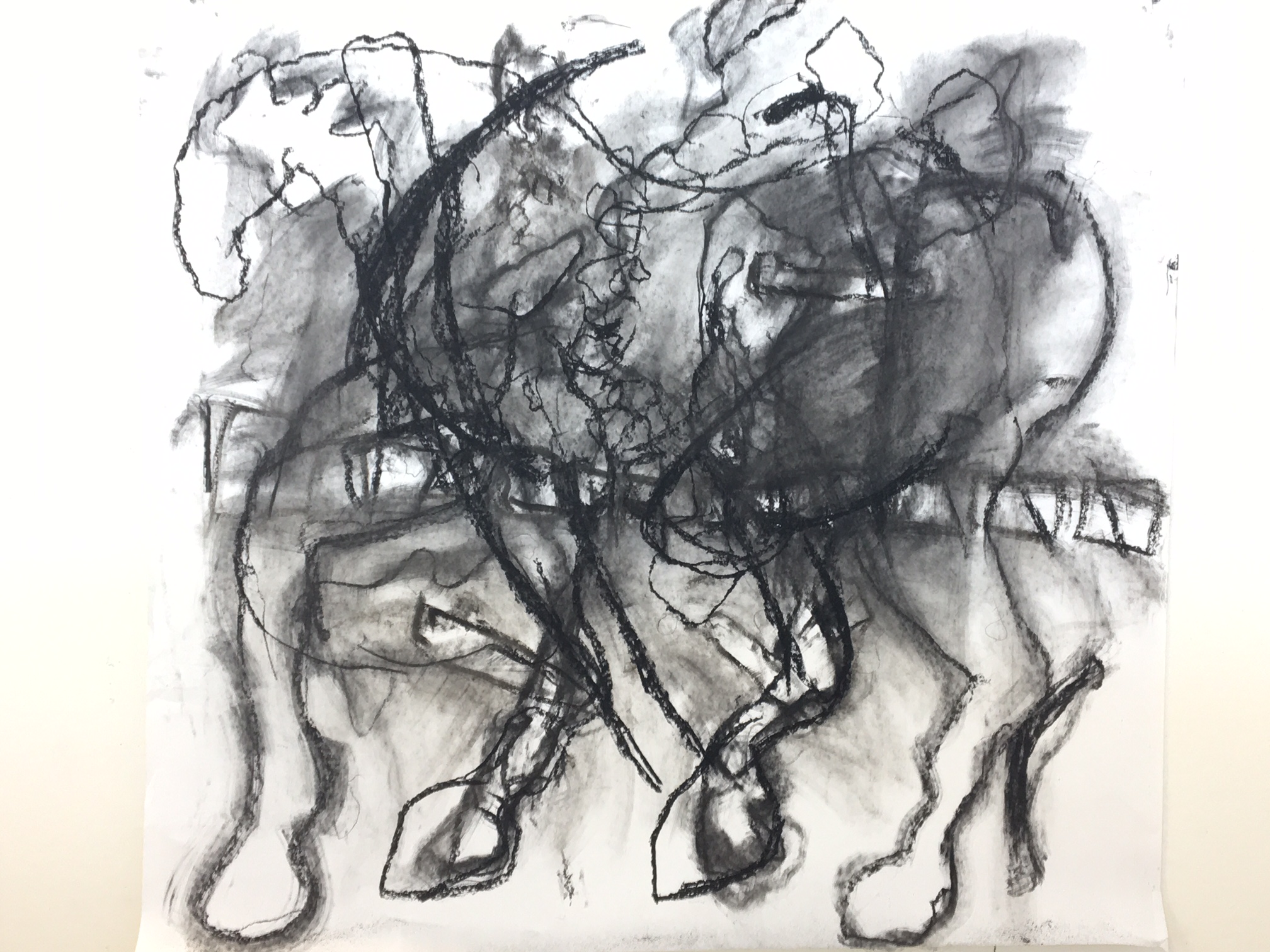